A Life Without Ketchup

February 22, 2011
I forgot my camera again.  As I walk in, I notice the table is set for four people.  My grandmother is confused.

She takes away the extra plate and utensils where I have seated myself.

There are sodas at my place setting and the one she has cleared.  I pick them both up to put them back, since I always drink water, and my grandmother takes me to the garage to put the sodas into the refrigerator that is out there.  When we return to the table, she looks at the table setting again.

"Where is your soda?" she asks me.  She can't remember that ten seconds ago she led me into the garage where we put the sodas back into the refrigerator.

She asks me if I have a steady boyfriend now.  She doesn't remember meeting him even though we've been together for about a year.  At least today she remembers who my parents are.

My grandfather cooked a lot today.  Vegetable and chicken soup, potato pancakes, and the chow fun I requested.  And, as always, there are chicken wings in the toaster oven.

Because I feel like hearing the story again, I ask my grandmother to tell me the story of how she met my grandfather.  Sometimes there are new pieces that I haven't heard before.  The new tidbit this evening was that her friend that picked her up to take her to the USO event, Joy, had a nickname. Evidently it was Pinocchio, because she had a red nose (which makes me wonder if my grandmother misspoke or if I mis-wrote because wouldn't her nickname have been Rudolph? Maybe she had a big nose...).  My grandmother and Joy went to junior high and high school together.

I go into the kitchen to try to help my grandfather finish up dinner and I find ants all over the cupboard and it reminds me of when I was a little kid. My grandfather is complaining that the chow fun noodles don't come in one piece anymore and now they are already sliced.  He doesn't realize that you can't always get everything from one store.  He never goes to Chinatown anymore, so unless the Asian supermarket near their house carries it, it no longer exists in purchasable form.

I help him retrieve the chicken wings from the toaster as he serves the rest of the food.  As we sit down, my grandfather utters the frustrated half-thought, "without ketchup, don't mean nothing," and off he goes to get ketchup for the wings.  My grandfather loves ketchup with abandon.  Much to my parents' chagrin, he will ask for it all the time, especially at fancier non-Chinese restaurants, because to him, those places need ketchup the most.  I remember the last time he asked, I made a mental note to myself to keep ketchup packets in my purse if we were going to a restaurant that wasn't Chinese.  I think the most entertaining time that he asked was at one of my mom's favorite restaurants, Lulu.


Not only will he never hesitate to ask, he is always flabbergasted and appalled if they don't have it.  I remember when I was studying abroad in Paris, my girlfriend and I asked for ketchup with our frites and the waiter laughed and said in a playful, yet mocking tone, "Les Americans aiment le ketchup!" which means, "Americans love ketchup."  How funny that this man who spent most of his childhood in China loves ketchup more than anyone I've ever met.

When he returns and we begin eating dinner, my grandmother tells me about how she gave my grandfather a watch for Christmas, which they think at the time cost about $30.  It was a lot of money back then, considering my grandfather was only getting paid $21/month in the Navy.  She had it engraved with the date: 12-25-43.

"You bought that watch for me and I says, 'I gotta take care of that girl!' " my grandfather says.

"I had to cash my savings bonds to pay for that watch!" my grandmother states proudly.

She bought him the watch because sometimes he'd show up with his watch, and other times not when he'd come to take her out.  She figured out that he was selling his watch to pay for their dates, in addition to knowing that he worked on his days off to make a little bit more. She felt so bad, and she wanted to give him a nice gift.

During the conversation, my grandmother offers me her soda three different times.  My grandfather is drinking a cream soda and makes a face.  He doesn't like it and says he only likes root beer.

My grandmother starts telling me about when she offered to take care of me.

She points at herself proudly.  As I type this, I giggle imagining that this was the 1980's way of saying, "Who has two thumbs and is going to take care of your daughter?"

She tells me that my mother paid her $15/month to take care of me, but that they'd always feel bad about it so they'd use the money to buy me something instead.  I'm pretty sure a good chunk of it went towards donuts.  I definitely have memories of going shopping with my grandmother, which pretty much entailed me sitting in my stroller licking all the frosting off of a single chocolate glazed donut she would give me, and then giving it back to her, sticky and chocolate-free, at the end of each trip.


One of my family's favorite series of photos of me... 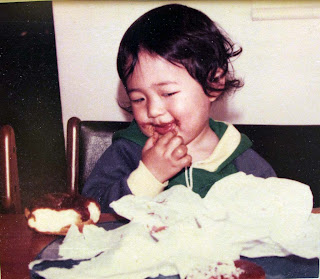 What's that, Donut? You have too much frosting on you? I'd love to help... but I really shouldn't... 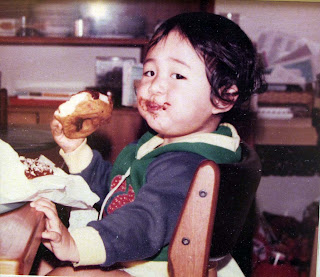 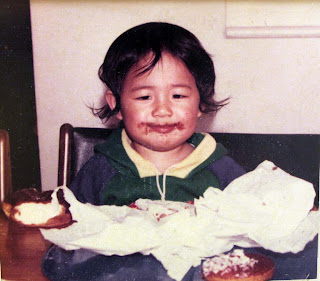