April 23, 2019
I am looking for different coloring book pages to print out on my watercolor paper.  Flowers would probably be best - he liked coloring flowers with me.  Should I print two? One is probably fine, we can share and do it together. My parents said my grandfather didn't even really understand what food was in the last couple weeks and didn't understand how to eat.

We make our way into the back where his room is. He looks so strange. He reminds me of my grandmother at the end.  His mouth is crooked like hers was. I never understood what happened to her jaw that made it all crooked like that.

Ba is very still and is the most gaunt I've ever seen him from not eating or drinking much for the past week or so. I'm scared and I feel bad I haven't seen him in a few weeks because my parents haven't taken him to family dinners due to his frailty. My mother tries to wake him and I feel like I'm going to have to watch him not wake up.

Thankfully, this does not happen. The too-still, too-thin body of my grandfather stirs and opens his eyes. It's hard for him to speak and his voice is raspy.  His mouth, without his teeth in, chews over his words with great effort.

"Do you want to sit up and see your family?" my mother asks.

He doesn't answer and fusses with his blankets, trying to pull them over himself. I try to help him and touch his hands. They are icy, like my grandmothers' always were.

He nods and we get another blanket and put it on him.  I did not expect him to be like this or to be this weak. His arms are frail looking and skeletal. I can still see the tattoos he gave himself when he was a young man.

I hear Joss at the foot of the bed with my husband, Afram.

"Ba looks like a monster," he whispers quietly to Afram. It's not malicious or joking, it's just the blunt observation of a five-year-old.

"Come on," Afram says leading Joss away, "Let's go outside in the backyard."

Ba says he doesn't recognize us. I bend down close so he can see me and try to hold his hand.

"Am I going to get well?" he asks me in his garbled, raspy voice.

"You have to eat and drink," my father says.

We bring him some 7up with a straw, his favorite drink.  My mother and I prop him up to help him take a few sips.  He grimaces and I hear strange sounds in his throat.

We lay him back down.  He takes a few more sips in this fashion.

I try to hold his hands and look at him.  He is still fussing with the blankets and moving all around. Then he starts to clap rhythmically. My father had told me that he had been doing that, that it was something dementia patients do. At night sometimes lately, he'd been singing to himself at night and clapping loudly and keeping everyone up.

When he stops clapping, I try to hold his hand again.  This time he holds my hand and looks at me, grasping my fingers.

"Your hands are hot," he says.

He continues to look into my eyes.

"I don't remember your name," he says.

"Stacey," my mother and I say together.

"Stacey," he says, with "sh" sounds, as he forces my name through his mouth with missing teeth. The name seems familiar to him as he speaks it. 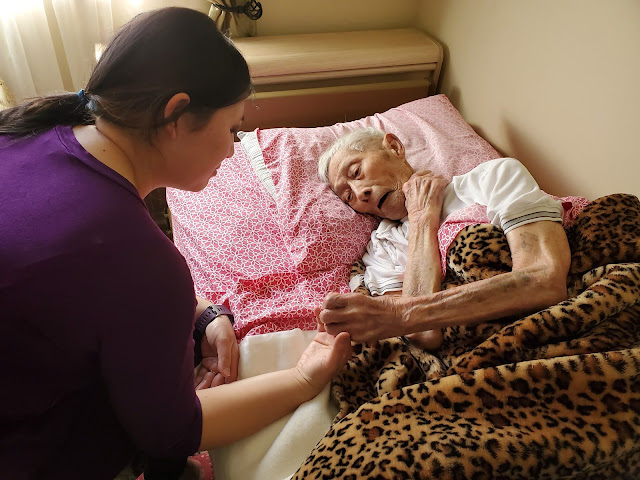 He looks at me some more.

I tell him thank you, smiling at him.

He starts to look even more tired, closing his eyes for longer periods.  I give him a hug and tell him I love him, well aware that this may be the last time I ever see him.

His eyes are closed when we leave.

My parents text me the next day that they've gotten a hold of hospice and they are going to take care of him now, and they don't think it will be very long before he passes away.

I remember being shocked and heart-broken when my grandmother died even though she was 92 and suffering after her fall.  I think a lot of my sorrow was for my grandfather.  Now he is all alone and can't really enjoy anything anymore or even understand what is happening around him.  He's 103 and I know it's time, but I can still see him so vividly when he was young and could do anything.

I feel like my life is separated into different realities now. It was a different life when I was married to Aaron, when my grandmother was alive, when my dog was still alive. I've gone through some kind of black hole and ended up on the other side where I'm so much happier in my new marriage, but loved ones have ceased to exist and it feels so strange.  The old life is like a very vivid dream that I just woke up from one day.

I like to think that soon my grandfather will be reunited with the love of his life, and he can give my dog Ruby all the treats he wants to without feeling guilty.

And I'll be left here, in another new reality, tearfully waking from the dream where the best grandfather in the world is no more.