Ba’s funeral is today. It’s weird to write / say words like that.  Somehow I am suddenly looking at myself when I was a little girl and I am speaking the unimaginable to her.

“What do you mean, 'Ba’s funeral?' Ba died? Ba can die?” she says. Her eyes are in shock and her little heart is torn in two. The look on her face is the same as when she was six years old and Ba left that file cabinet lying in the walkway in the garage.  Grandma did not see it and tripped over it, cutting her leg badly on one of the sharp metal edges. There was so much blood. It was a thing a six year old should never see happen to a beloved.  It was the worst thing she’d ever seen in her life and it terrified her. Ba dying is not a thing that should ever happen. That thing was far in the future and only happened to other unknown people, not Ba.

Now Ba and Grandma are both gone. It’s a day that I’ve dreaded, but never really thought would happen. I’m in a mirror dimension staring back at myself on the other side of old photos and old videos of when they were still alive and my heart was whole.

My heart has broken so many times now for so many loved ones that have passed away, you would think it was standard practice. Cry, pick up the pieces, keep going until the next time. But, it’s not. Each time it’s fresh. A brand new sorrow. The only thing I can be thankful for is that it’s a door to new empathy, and every loss connects me to even more people that are shoved forcefully into this room of grief. I just wish I had better words to express than just, “I am so terribly sorry for your loss and I’m here for you.” It is such a huge loss.  I really am sorry.

Sorry feels like such a stupid word that has to mean so many things from, “I regret that I bumped into you on accident,” to “I understand that you are sad because you lost the person who cared for you your entire life and now there is a giant hole in your world that can never be refilled.”

And there will always be new holes. You just have to try and build around them. And it’s okay to lie down in the holes sometimes, look up in the sky and feel lost and sad for a while.

I am in the hole now. I woke up at 4:30a because last night I decided I wanted to finish painting the page I printed for Ba and I to watercolor on Easter.

I want to leave it in his coffin. “Ba’s coffin.” That’s another thing that was never supposed to exist or be uttered. It was only supposed to be a phrase that would appear in a morbid thought that would never come to pass. But, here we are and it’s a reality. I looked through the binder with my dad at Woodlawn the day that Ba died.


We talked about what color he might have liked. He’ll be lying in it today at 10:45a at Woodlawn with the casket spray that my mom chose and the sash with the message that I helped her write.

We’ll see his body for the last time for 15 minutes and then they’ll put him into the mausoleum next to my grandmother that they pre-paid for all those years ago.  Then I will never see him again.

I’m thankful I took all those videos of them nine years ago when I was having dinners with them weekly. We watched one of them the day he died. My parents and I were together to make arrangements at Woodlawn and clean out his room.  We were taking a break at my house and I put the DVD on.  I watched Ba cook me tomato beef chow mein (“but this has chicken because you didn’t want beef,” he said) and I asked them to tell me stories from their life. We saw them laugh and laugh as they told the Gelusil story.  I miss them.

They’re with Dale now. Dale’s been gone a long time. He’s probably showing them around.  I’m glad Ba can finally be with my uncle Kaye again.  When my grandfather could still remember things and have cognizant thoughts, he would say, “I miss my brother, Kaye. He was my best friend.” I never had any siblings, but I would feel so sad for him and just tell him the stupid “sorry” word and wish I could do more.

The funeral is over. Afram and I went to pick up my parents around 10 and we got there early. Dennis (my dad’s cousin) and his wife Zenny were there and we caught up for a little bit while we waited for everyone to arrive.

We went into the chapel as scheduled at 10:45. There weren’t very many of us, as we were expecting. That just happens when you outlive everyone. Everyone gave us hugs and we went to view Ba. I was going to say “the body,” but that feels so weird, although it felt more like that than “Ba.” He didn’t look like himself anymore.

I saw the beautiful casket spray my mother had ordered with the message I asked her to write. It had some spelling / grammar errors, but I guess that doesn’t matter much. 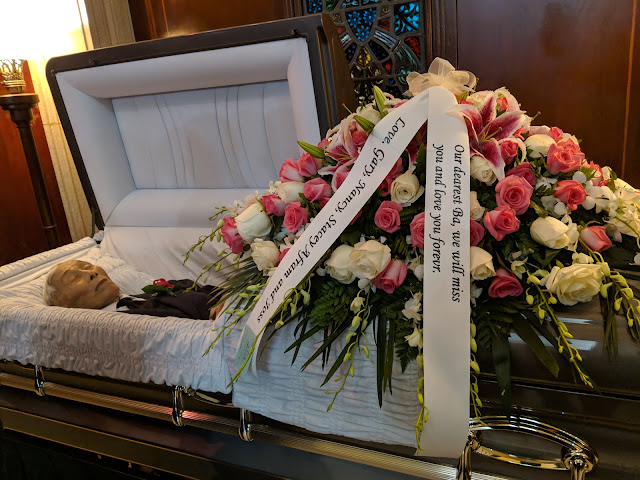 I placed the watercolor in his casket with him.

“I wish we could have painted this together, Ba,” I said. “I love you.” 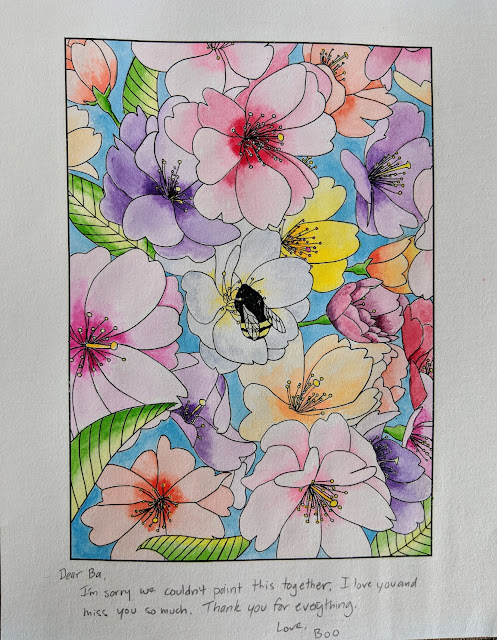 At around 11, we went to the mausoleum to have the casket put into the mausoleum slot.  They would be sealing it up afterward, and told us we didn’t have to wait. In the meantime, they put a little blue curtain over the hole. 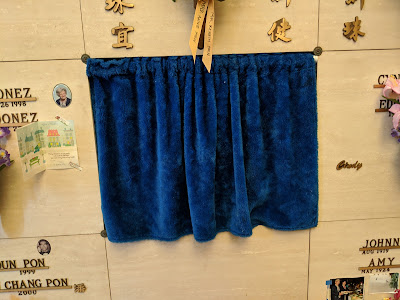 My mom passed out the traditional red and white envelopes, and we dutifully ate our candies, as is the Chinese tradition. 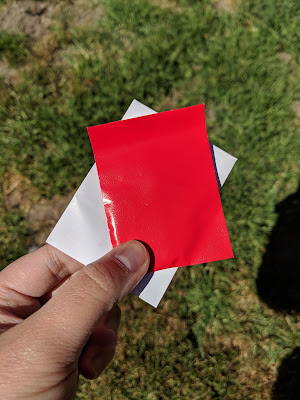 We had dim sum at H&L afterward. It was really good and Ba paid, just like he always demanded to when he was alive.  He would have been so happy to treat his family.

I love you so much, Ba. I can never thank you enough for all the love and generosity you always showed me.  I hope you and Grandma are happy now in heaven, playing mahjongg, traveling, and eating at all the best buffets.