The State of the Union Address is on the television when I walk in, blaring as usual.  My grandparents deny that my grandmother couldn't remember that I was her granddaughter last week.

My grandfather serves snap peas tonight with dinner and tells me that the word for them in Cantonese is "ho lan dao" because they originated from Holland.  "Dao" means bean.  He also tells me that back when he was young, if you traveled to China for a visit, you gave your relatives bags of tiny dried shrimps, because they didn't have those in China.  "But, there are no more here," he tells me.  "They've fished them too much here in America and there's no more, so now they come from South America."

My grandfather is also insistent tonight that my grandmother has a good memory and that she only forgets things that happened two minutes ago.

Later, I go visit my old room where I used to stay when my grandparents took care of me as a child, and I realize I haven't been in there for quite a while.  I am shocked at how small the room was.  I take pictures of my height chart and of the Sesame Street paintings my grandfather created on the walls for me.  I also realize where I inherited my hoarding problem.  Some of the characters I couldn't even take pictures of because the room is so full of stuff. 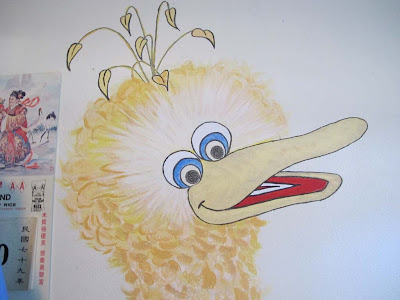 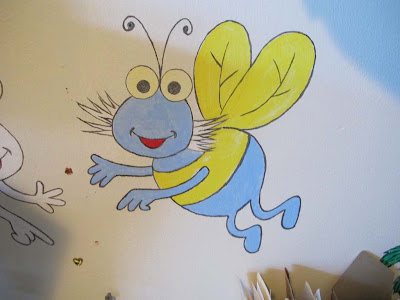 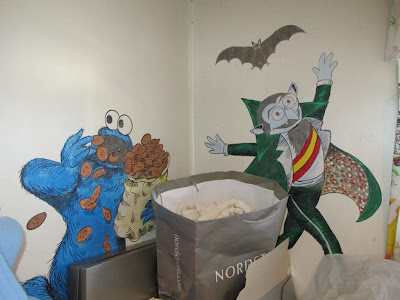 I remembered the clever cloth filled with stuffing that came out of the walls as Kermit's and the Monster's hands so that they could "hold" the framed art on the wall. 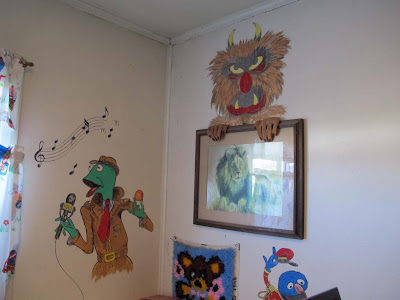 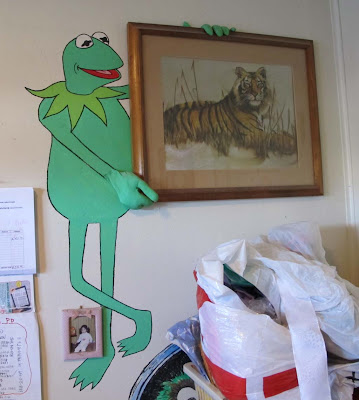 Some days I'd come over, and my grandfather would have stayed up all night painting a new Sesame Street character for me, so he could see the look on my face when I arrived the next morning to see my new friend, perfectly recreated on the wall.

I glance around and see that my growth chart is still on the closet door where I had placed my precious shiny panda stickers. I remember how happy the rainbow panda stickers made me before I became so obsessed with stickers that I wasn't able to use them and enjoy them anymore.  I went through this phase where I wanted to save them all for some magical perfect occasion where I would achieve maximum enjoyment in using them, which never happened.  Ironically, these stickers that I thought of as being "wasted" are still here for me to see and appreciate so many years later, where the rest of my stickers are most likely lost in the oblivion of time. 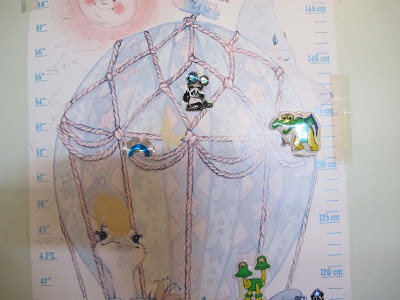 I go into my grandfather's room and am again surprised at the size.  As I look at the shelves and photos, I walk into the center of the room and a memory washes over me of being a young child and watching his television while lying down on his bed on a sunny afternoon.  I remember feeling tired and falling asleep, surrounded by familiar smells with a feeling of quiet and safety.  Everything used to be so much larger.

I walk back from his room into the kitchen and offer to help clean up.  My grandmother refuses and tells me I can go home now if I want to.

"No, I want to give you some dessert!" my grandfather says.

"What if she has somewhere to go?" my grandmother insists.

"No, she doesn't!" argues my grandfather.

My grandmother laughs.  "Are you sure you don't have somewhere to go?"

"No," I reply with a smile, and sit back down at the table.

After my grandfather serves us his usual dessert of fruit with a few spoons of ice cream on top, he tells me the story of his dogs that he had in China.  There was the family dog that was called Dong.  He realized later that it was called Dong because they thought it was an American name.  It was actually just the Chinese ear hearing "dog."

Dong was a female dog, and she had puppies.  My grandfather made little doghouses, one for each puppy. He taught them all to go to sleep at night in each of their respective houses and cared for them.

My grandfather went to the next village every day to go to school, because there was no school in his village.  One day he came home from school and there was a huge party at his house.  Everyone was having a good time, enjoying a big feast.  They had invited a special cook over to the house to prepare a special meal.  To my grandfather's horror, they were eating his puppies.

"They said they were so tender, they could almost eat the bones.  They all laughed about it," my grandfather says, with decades old disgust and anger. "I never spoke to the guy who did the cooking again.  I hate him.  He killed all my dogs.  A lot of the people that came over were neighbors.  They all came to eat it.  No leftovers."  The neighbors made fun of my grandfather for fussing so much over "food."

"They know they're wrong if they wait till you're not there to do it!" my grandmother says vehemently, referring to the fact that they waited until he was away at school to have the feast.

"I could never forget that," he says, shaking his head. "Good thing when a dog's old you can't eat it.  In China, you eat cats old.  I don't know why.  Kinda stupid to me. Little pups never grow to be big dogs..."

My grandfather has a soft spot for my dog, Ruby, and always buys treats to stuff in his pockets for when he sees her.  One time, he asked me not to bring her to dinner, because he can't handle the look on her face when she's trying to get food from him and he has to stop feeding her.  He can't really accept that dogs are bottomless pits and will always make that face if you have food. 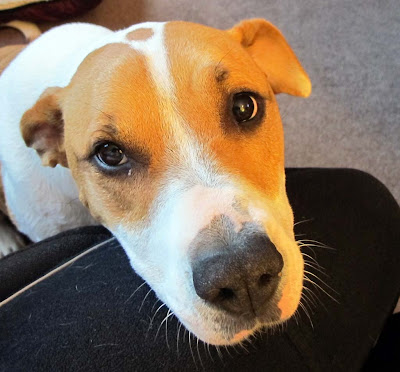