I've stopped calling Golden Age to let them know that I'm coming.  Sometimes I have to say it several times, and it often doesn't matter. Sometimes when we pick him up for dinner, they've already fed him.  And it's always too much, according to my grandfather. "I just can't eat that much anymore," he always says.

I walk in the door and Connie tells him that I'm here. He starts to turn around and I lean over the chair to put my hand on his shoulder.

"Sure!" he answers brightly.

This is better than the last time I came over to pick him up for the afternoon this past Friday. That day, when I came over, everyone was watching TV and my grandfather had his head down, looking at his hands.  He did not look up when I came over, so I put my hand over his so he could see me.

He looked up, his eyes teary.  I told him I was there to take him over to my house, but it took him a few minutes to get out of his funk.  My chest felt heavy.

Today he is happier.  I tell him to bring his sweater since it's cold out, and he hangs his fanny pack around his neck like he always does now.  It's been too big for his small waist for quite some time now, so he always wears it like a huge necklace.

"Do you know that Gary's in China?" he asks me, incredulous.  He has been doing this since my parents left on vacation a week and a half ago.

"Yes, I know," I say, carrying his walker ahead out to the car as Connie walks him down.

"This is my granddaughter," he tells Connie. "I can't believe my granddaughter is taking me out to lunch. She's an adult now." He laughs, still remembering me as the little girl he has to take care of.

I decide to take him to Shanghai Dumpling House today.  Dumplings are pretty soft, and I think he'll enjoy the Lion's Head Meatballs.  He doesn't do well with chewing anymore.

Luckily we get a spot in front.  I hold his arm as he hobbles next to me into the restaurant.

We sit down and I ask him to look at the menu since there are pictures.

Usually this is fruitless because he doesn't like to make decisions anymore, but lately, I guess it's more at the forefront of his mind that he wants soft foods to eat.

"Something soft, like noodles," he says, pointing at the noodle page.

"How about this one?" I offer the Shanghai noodles.

I order this and the Lion's Head Meatballs before going to sit next to him so I can have a picture with him.  I've been trying to take more pictures with him when I can.

"Can I have a picture with you, Ba?" I ask as he moves in along the bench.

I put my arm around him and we take a selfie. 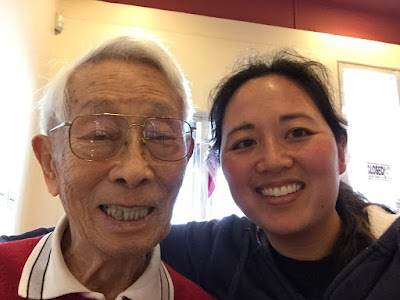 "That's nice," he says, looking at the photo.

I show him the pictures my parents have been sending me from their China trip.

"I don't go anywhere anymore. Not since Grandma's gone," he continues, and I nod again sadly.  He and my grandmother used to travel every year. They'd always bring me back little souvenirs.

He tries to read some of the signs in the photos. Then he reads the sign in the restaurant in Chinese to himself.

"That sounds good," he says after mouthing some words in Chinese.

I try to order some, even though I know there will already be too much food, but they don't have any. I get the soup dumplings instead, since I know that will be a good soft substitute.

Soon after we're done looking at photos, the noodles arrive.

"That's enough," he says after I serve him the noodles.  "Don't order any more stuff."

I nod agreeably, even though there are two more dishes coming.

He begins eating the noodles and as usual, asks for a knife so that he can cut everything up into tiny pieces.  I go over to the waiter and get him one.

"They speak Filipino," he says of the caretakers at Golden Age. "I don't speak one word of it. I always ask for knife and fork and they always laugh and say, 'What kind of Chinese are you?' They speak Filipino, but I know what they're saying. My teeth are no good anymore."

The meatballs and soup dumplings arrive and I serve him some.

He smiles and then says something in Chinese as he begins cutting it all up. 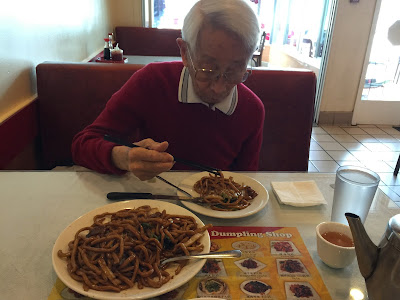 "What does that mean?"

"It means, 'eat like a baby,'" he replies as he smashes the little cut pieces with his fork.

When I used to eat with him and my grandmother, I'd ask them to tell me stories about when they met, or when my dad was young, or when my grandfather was working.  They would go back and forth adding to the story.  Now it's just my grandfather and he gets too sad when I ask him things that remind him of my grandmother.  So, I try to ask him about his old jobs.

"Weren't you a bartender in Salinas? And didn't you make your own char siu?" I ask.

"That was a long time ago..." he answers.  "You mean when I built the China Clipper?" He's referring to the restaurant he helped his mother open in Portland, Oregon.

"I made that plane in the tile..." he continues.

The conversation sort of peters out, which is the new normal.  Anything he talks about at length now is his complaints with the assisted living home, or how he can't eat anything anymore.  And, I'm afraid to ask him about anything else because it usually just gets him all choked up.

Thankfully, he and my son get along great and always make each other laugh so that I don't have to continually think of ways to avoid making my grandfather cry.

He eats a healthy number of the soup dumplings as he continually complains that there is too much food. "There's enough food for five people!" he says.

"Don't worry, I'll take home all the leftovers," I say each time.

Lunch is over quickly since there's not much to talk about, and my grandfather always says he doesn't eat much anymore.

"You better let me pay," he says as the check comes. "Otherwise I'll be real upset!"

"It's the least I can do," he says fishing money out of his fanny pack.  "I can't drive or do anything anymore."

He puts a hundred dollar bill on the check tray.  He always likes to carry around hundreds. I've never understood why. It seems so inconvenient.

I drive him back to Golden Age.  I say goodbye to him and give him a hug.

"Thanks for having lunch with me," I tell him. I always tell him this because I want him to feel like he's doing me a favor.

"No, you don't understand. It's my pleasure." His voice is shaky and there are tears in his eyes.

"Gary will be back the day after tomorrow. I'll see you in a few days," I say.

"I hope you don't expect me to remember," he laughs and I wave goodbye and close the door behind me.