May 18, 2015
When I went with my grandfather and my parents to visit my grandmother in rehab on May 3rd, I brought a drawing pad for him and some watercolor crayons.  He used to always draw with me and was a wonderful artist.  He sat at the edge of her bed and I sat in a chair next to him.

He handed the pad and crayon back to me shaking his head.  I sighed and just started sketching some orchids that were in the room.  I thought maybe I could inspire him to help me.  I also drew a random cube. The whole time, he watched me intently.

"Here, why don't you help me?" I asked, handing him another crayon and the pad again, now that it was no longer blank.

He gingerly outlined the cube, and motioned to try and draw some stems or leaves coming from the flowers, but the crayon didn't touch the paper.  He handed the pad back to me again.

I flipped to a clean page and started to draw my grandmother lying in her bed. She stuck her tongue out over and over, making silly noises like a child because I was looking at her and she knew I was trying to draw her. I drew a basic outline  of her in the bed and left her face and details empty just to give my grandfather a starting point, and handed over the pad again.

He carefully began to make some light scratches on the paper to make her nose.

"No, you're not! Besides, it's not for anything, just for fun," I said as he handed the pad back again.

Her nose was large and not proportionate, but I just wanted my grandfather to be able to do something again.  They wouldn't let him have any of his tools that he liked to tinker with at Golden Age so I was hoping that this was something he could do with his time.

Eventually my mom came over and offered to draw my grandmother.  My mom has always been an artist as well.  She did a much better job. 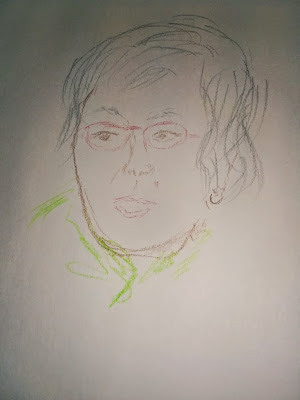 I realized I should probably get my grandfather something that required less thinking and concentration.

Recently, I'd discovered that there are adult coloring books. No, not that kind of coloring book although there are those too.  There are more intricate, less cartoony coloring books for grown-ups so I opted to get one of those for my grandfather.

The following weekend, on Mother's Day, after brunch with my parents, we all went with my grandfather to Pacifica Rehab again to visit my grandmother. 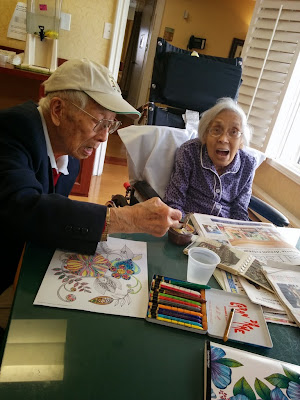 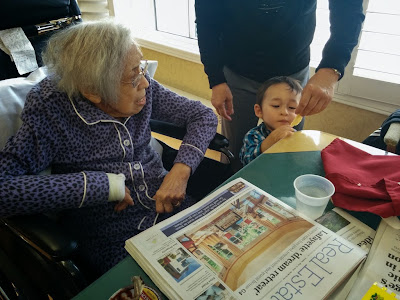 This time I had my coloring book and I asked my grandfather to help me color one of the pages.  He agreed and even seemed focused on the task.  I think he may have even enjoyed it.  My grandmother watched us.

"Ba hasn't colored with you since you were little," she said with a smile. 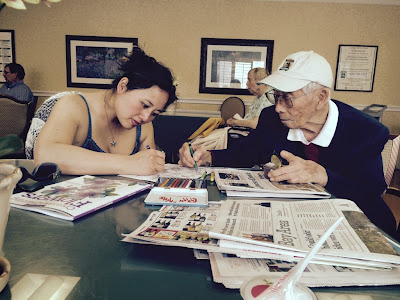 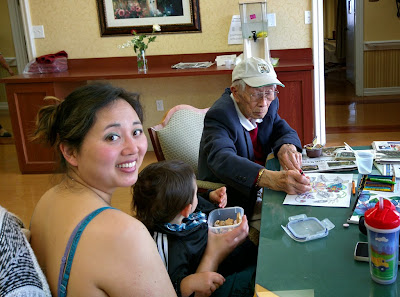 When we were almost finished, there were a few empty spaces left.

"Put some in there," he said, pointing at them. I colored them in.

I like to think that he felt accomplished.  I asked him to write his name, and I signed too, although my signature looks more like a scribble than anything. 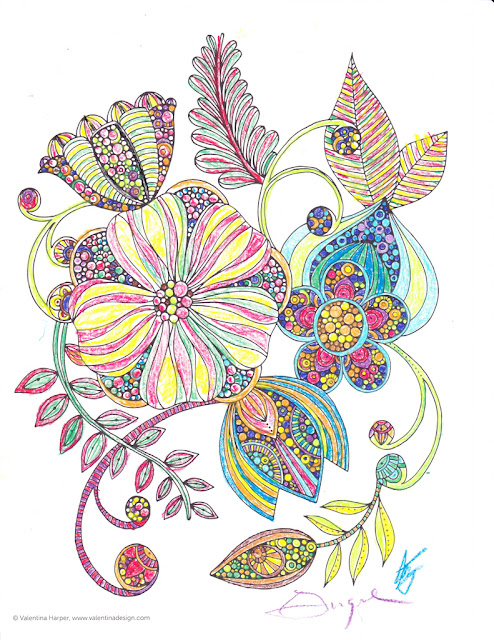 Eventually it was time to go and my grandmother was led back to her room in her wheelchair.  I didn't say goodbye to her because I didn't think she'd remember anyway.  She enjoyed seeing us and Joss because she loves babies, but she wasn't really always cognizant of what was going on and she'd forget what just happened a moment later.

And then, three days later, she passed away.

Even though it's ridiculous, I just sort of thought subconsciously that my grandparents would live forever.  I knew that my grandmother was declining, and that they are both really old, but the thought that they might actually pass away soon was not a thought that I entertained in my mind.

My father called me the Wednesday morning after Mother's Day and told me that Pacifica Rehab had just called him.

"Grandma passed away in her sleep this morning."

I began sobbing immediately.  She was getting better. She was supposed to be released in a couple days to be with her husband again at Golden Age. She wasn't supposed to just stop breathing.  And I didn't say goodbye to her.  My mother kindly keeps reminding me that she knew I loved her and I always told her I loved her.  I still feel rotten.

The rest of the day was a blur of things I wasn't sure if I wanted to remember or not.  I told my dad I'd tell my grandfather.  I wanted to hold his hand and make sure I was there for him.  It was the worst thing I've ever had to tell anyone in my entire life, but somehow I knew I had to be the one to tell him.  I didn't want my dad to have to do it and I wanted it to come from me.

My grandfather began crying immediately in the car on our way to Pacifica Rehab and I held him as he sobbed.  He said he didn't want to see her, that he wanted to remember her the way she was.  We said we understood and didn't make him.

I was glad my grandfather didn't have to see her like that.

"She doesn't look like herself," my dad warned me.  She didn't.  I saw her and I cried and cried on my husband's shoulder and I'll leave it at that.

And now we plan the funeral and my grandfather seems weaker and more frail than I've ever seen him.

I spent today with my grandfather and Joss. My grandfather has been weak and has some kind of cold or flu, so my parents took him to the doctor this morning, Afterward, he dozed on the couch at my parents' house while watching Chitty Chitty Bang Bang with me, and talked in his sleep.

He speaks very clearly, but his voice is raspy either from being sick, not sleeping, or crying all the time... probably a combination.

I told my mom I'm not ready for him to go, but that I know that it's common for elderly widows and widowers to die shortly after their spouse after being with them for so many years.

"I just want some more time to spend with him and talk to him," I cried.

She told me she thought he'd be okay, but we all don't know.

"You have to live forever, Grandma," I used to joke with her.  "You have to take care of MY babies too!"

"I have to take care of YOUR babies TOO?!" she'd always laugh incredulously.

I miss my grandma.

Not Even Fifteen Cents

May 08, 2013
She pushes the noodles of her Vietnamese mixed bun bowl around. "Look, there's nothing here!" She has already given most of the meat and imperial rolls from her meal to my grandfather and my dad.  All that's left are the noodles. My dad asks me about work and we chat a little bit. "This wouldn't even cost fifteen cents," she says angrily, pushing the noodles around in the bowl some more. "Look at this!" My grandfather joins in.  "Everything is just warm, not even hot." "I'm never coming back here. Ever!" She pushes the noodles around continually, demanding that we look at it. My father just smiles at her. "You're going to forget in three minutes anyway." She doesn't hear him. "I don't even think it will be three whole minutes," I reply to my dad. "Not even fifteen cents!" she mutters again. "Wednesday is better because then I have time to forget what it'
Read more