August 04, 2012
I was going through some old papers that my mom had given me to scan and look at, which I always find entertaining.  When my dad was ten years old, his teacher assigned the class to write their autobiographies.  As luck would have it, it's survived 55 years since my father wrote it, to be scanned and shared with you today.  It was assembled with blue construction paper, binder paper, tape, and photos.  :)  I hope you enjoy it as much as I did. 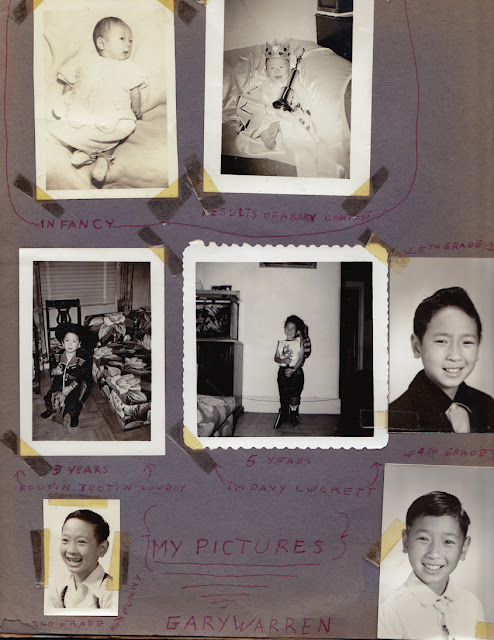 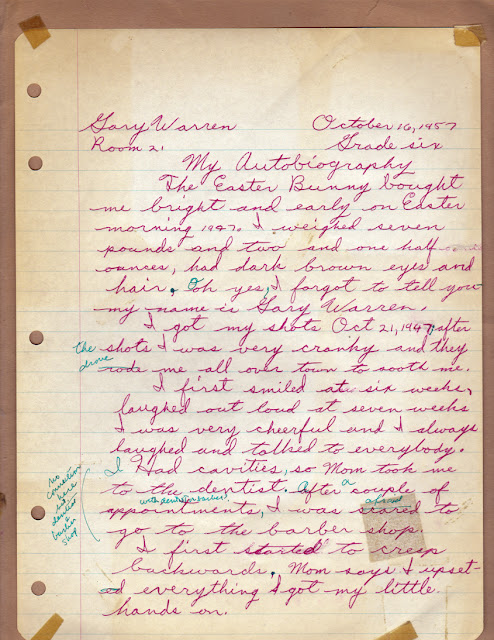 The Easter Bunny bought me bright and early on Easter morning 1947.  I weighted seven pounds and two and one half ounces, had dark brown eyes and hair, oh yes I forgot to tell you my name is Gary Warren.
I got my shots Oct 21, 1947 after shots I was very cranky and they rode me all over town to sooth me.
I first smiled at six weeks, laughed out loud at seven weeks I was very cheerful and I always laguhed and talked to everybody.
Had cavities so Mom took me to the dentist after couple of appointments I was scared to go to the barber shop.
I first started to creep backwards, Mom says I upseted everything I got my little hands on. 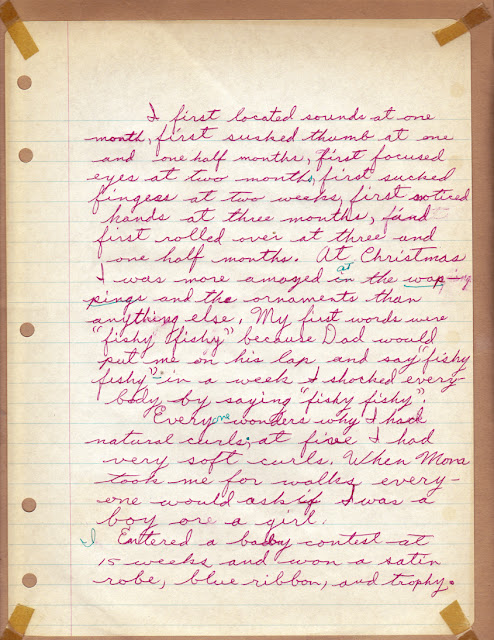 I first located sounds at one month, first sucked thumb at one and one half months, first focused eyes at two month, first sucked figners at two weeks, first noticed hands at three months, and first rolled over at three and one half months. At Christmas I was more amazed in the wrappings and the ornaments than everything else. My first words were "fishy fishy" because Dad would put me in his lap and say "fishy fishy" in a week I shocked everybody by saying "fishy fishy".
Every wonders why I had natural curls, at five I had very soft curls. When Mom took me for walks everyone would ask if I was a boy or a girl.
Entered a baby contest at 15 weeks and won a satin robe, blue ribbon, and trophy. 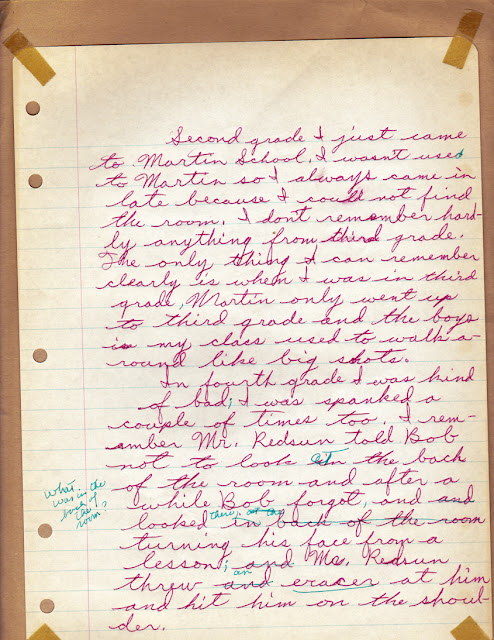 Second grade I just came to Martin School. I wasn't used to Martin so I always came in late because I could not find the room. I don't remember hardly anything from third grade. The only thing I can remember clearly is when I was in third grade, Martin only went up to third grade and the boys in my class used to walk around like big shots.
In fourth grade I was kind of bad I was spanked a couple of times too.  I remember Mr. Redsun told Bob not to look in the back of the room and after a while Bob forgot and looked in back of the room turning his face from a lesson and Mr. Redsun threw an eraser at him and hit him on the shoulder.