How to Get My Grandfather's Business

May 15, 2012
I finished my javascript class today and then Afram and I drove home early to have dinner with my grandparents. I told them I wanted to go to Cheung Hing again.  We find a spot in front, but my grandmother is having an easier time walking again, so it doesn't matter too much.

We sit down and deciding what to order goes like this... 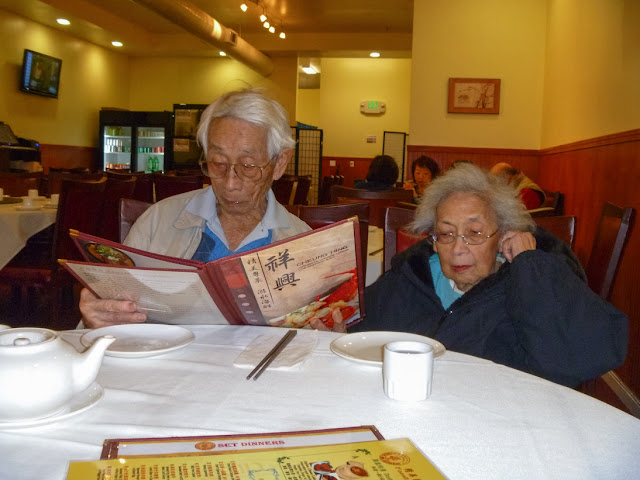 My grandfather says he's going to get flounder, much to my delight and surprise, but then he ends up ordering fried calamari again, and then I'm sad.  Afram and I order gai lan, e-mein with dried scallops, seaweed tofu soup, and general's chicken (which turns out to be too hot for my grandfather, even though he used to like spicy things and it's not very spicy). 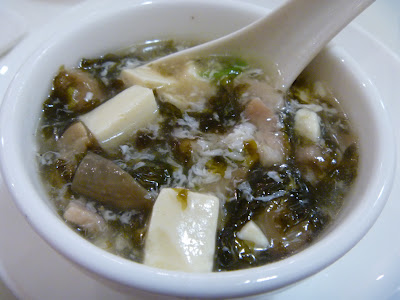 As we ate, I tried to think of stories for my grandparents to tell.

I was expecting him to talk about being poor and how yams were cheap in China and as a result, they always mixed it in with the rice to stretch it.  He ends up telling us that yams were prevalent in Northern China and that he prefered American potatoes.  He tells us that the Chinese word for potato actually translates to "foreign yam." While we are talking about it, the cute young Chinese waiter comes over and talks to my grandfather about China.  My grandfather tells him that potatoes are hard to get in China and the waiter is confused, saying that he never had a problem finding potatoes when he was in China.

"Well, this was like eighty years ago," I explained. There are looks of recognition and laughs all around.

It's as if the waiter told him they don't have water. 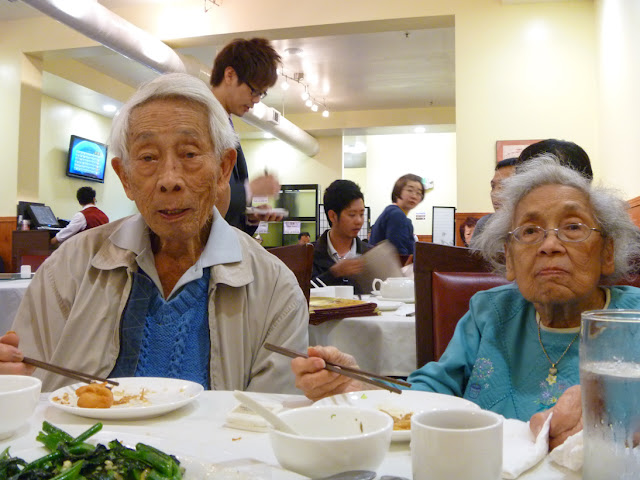 I imagine that this will be the end of it, but then later when we are almost done eating, he calls the head waiter over again.

"You know," my grandfather is practically yelling at the waiter, "You'd get a lot more of my business if you just had ketchup! I live five or six blocks away! I'd come here a lot more often if you had ketchup!"

The waiter laughs good-naturedly and says he'll talk to the boss about getting some ketchup.

"Or maybe we can just get a few packets from McDonalds," the head waiter offers as I cover my face with my hands.  At least they seemed to take it well.  Guess that's the good part about being 96. You can yell at people about not having ketchup and people just think you're cute.

My grandfather pays the bill and they bring us a red bean tapioca soup dessert.  He continues to rant about the absurdity of them not having his favorite condiment.

I mentally decide to start carrying around ketchup packets in my purse where ever I go out with my grandfather so that he won't continue to dislike places with good food just because they don't have ketchup.  Suddenly, I realize why he likes Beijing Buffet, even though it basically consists of repulsive old steam-table food: they have unlimited self-serve ketchup.

I was looking over my blog and realizing I haven't written since August of last year.  My grandparents really don't say much anymore, and there seems to only be a few stories left that they can remember. I woke up around midnight last night and couldn't fall back to sleep for a couple of hours. It would be easy to blame the fact that we took a red-eye back from our Kauai honeymoon yesterday morning, came back and napped for a few hours until around noon, but it was my mind that was keeping me awake. We arrived back on a Tuesday, and my mom hosted our weekly Dementia Dinner, which is now my tongue-in-cheek name for dinners with my grandparents. My mother was kind enough to cook Chinese dishes for us, and my grandparents were half an hour late. I called them at 3p to tell them that dinner was at 5p - my mom was trying to be considerate of us since we were exhausted from our trip. She called them again at 4:55p and they hadn't left the house yet and still h
Read more