February 13, 2011
Sometime during World War II, a woman named Joy was insistent that her friend Lily join her in supporting the troops on USO nights at the YWCA.  Lily really was not interested in going to these events to spend time with the servicemen.  Every USO night, which were Wednesdays, Joy would come over to pick up Lily, so Lily decided to get ready and leave the house before her friend arrived.  Joy was too smart though, and anticipating this, she arrived even earlier to pick up Lily.  And so, Lily was stuck accompanying her friend to these events. 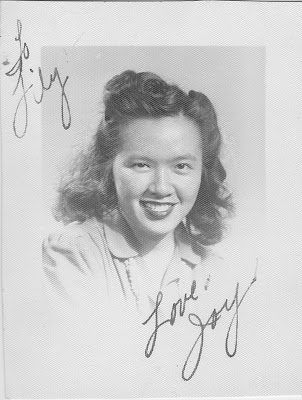 There were different things to do at these USO nights, but the main things seemed to be playing at a mah jong table and dancing with the servicemen on leave.  On one particular night, Lily was playing mah jong when she saw a young serviceman walk by the table several times, who seemed to be pausing to look at her each time.

"Who's that creep?" she asked her table mates, with a dissatisfied look.  They shrugged, and the slender, dark-haired, young man walked by a few more times.  Eventually, Lily became annoyed and decided to leave the table.

"I'm sick of this guy looking at me!" she exclaimed, and got up from the table in a huff.

She decided to go and find some records to play for the dancers for a while in the hopes that when she returned, the creepy guy would have gotten the message and have stopped coming by her mah jong table.  Lily had no such luck.  Upon returning to her table, the young man returned and, smiling, asked her to dance with him.

The USO event coordinators were tricky.  They would overwax the dance floor so the young women would be slipping, having to fall into the arms of the servicemen.  Reluctantly, Lily agreed and fell prey to this tactic. They danced together for the rest of the night.  The young man's name was Angue*, and as he held up the petite young Chinese woman in his arms to keep her from falling as her feet slid around on the dance floor, he had every desire to take care of her and make sure that she was safe.

Lily, however, was having none of that.  She had done her duty for the servicemen and she didn't expect to see Angue again.

Despite Lily's original disinterest, in the following weeks, they would continue to meet on USO nights, and then one week, Angue showed up in his Navy uniform with his sister Cecilia at the apartment where Lily lived with her mother and her brother.  They wanted to take Lily out to a nightclub.  Perhaps all the dancing had convinced her he was no longer a creep, because Lily agreed and they headed off to a nightclub together.

Unfortunately, it was sometime after the attack on Pearl Harbor in the 40s, which was a time that was unkind to Asians living in the United States.  Angue, Lily, and Cecilia were turned away from the nightclub because they were Chinese, despite Angue wearing his United States Navy uniform.  Only whites were allowed in the club.  Where they went instead seems to be lost in the abyss of forgotten memories, but it was the start of relationship that would last more than six decades (and currently counting).

Angue was stationed at the Alameda Naval Air station and was only making twenty-one dollars a month from the U.S. Government.  Every time he wanted to see Lily to take her out on dates, he would have to pawn his watch to get money to take her out.  Once he would get paid, he'd have to buy his watch back from the pawn shop for twenty dollars.  Angue would only have one dollar left until his next payday, but he was spending time with his sweetheart.

After several months of seeing each other, Angue decided he wanted to spend the rest of his life with Lily.  She retells it as him saying to her one day, "I wish we were married," with a sad, puppy-dog face. They were young and poor with only Lily working as one of Koret of California's first employees, and Angue being in the Navy, so they decided to elope, as they had no money for a reception or to celebrate with their family and friends.

They decided to take the Greyhound bus out to Salinas, a town that Angue knew.  Before he got drafted for the Navy, he had worked in that rodeo town as a bartender.  When they arrived, they went to the Salinas Police station and asked where they could get married.  Coincidentally, the policeman at the station happened to be a police judge, and he offered to marry them right then and there, but they needed two witnesses.  There happened to be a secretary and a janitor there working, and they agreed to be Lily and Angue's two witnesses.  The happy couple paid them five dollars a piece and it cost them fifteen dollars to get married.  Twenty-five dollars was a lot back then, but they were able to be married right away, on June 10, 1944.

After their simple ceremony at the police station, they took the bus to a little town near the Russian River called Rio Nido for a short honeymoon.  They rented a little shack in a tree, a cute little tree house, and every night there was a romantic bonfire nearby for them to enjoy for their first few nights as a married couple before they headed back home to start their lives together.

Even now, so many years later, my grandfather, Angue, still takes my grandmother Lily's arm to make sure she doesn't fall, everywhere they go.  Some time ago, within the past few months, my grandmother couldn't remember who my grandfather was for a while, but she wasn't frightened.  She only wondered why he was getting into her bed with her.  He gently reminded her that he was her husband, who has loved her for countless years. Just as he does every other night, he tucked her into bed next to him, knowing he will continue to love her and keep her safe, for as long as he can.

(Update: 1/16/16 - Found an old picture of my grandparents, probably around the time they met) 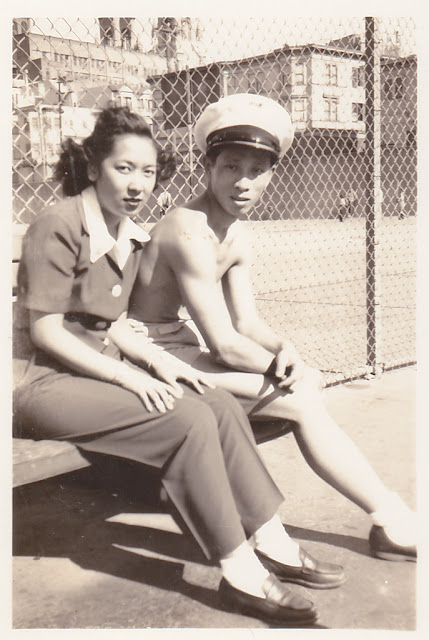 *pronounced an-gew, but everyone calls him "Angie."

I was looking over my blog and realizing I haven't written since August of last year.  My grandparents really don't say much anymore, and there seems to only be a few stories left that they can remember. I woke up around midnight last night and couldn't fall back to sleep for a couple of hours. It would be easy to blame the fact that we took a red-eye back from our Kauai honeymoon yesterday morning, came back and napped for a few hours until around noon, but it was my mind that was keeping me awake. We arrived back on a Tuesday, and my mom hosted our weekly Dementia Dinner, which is now my tongue-in-cheek name for dinners with my grandparents. My mother was kind enough to cook Chinese dishes for us, and my grandparents were half an hour late. I called them at 3p to tell them that dinner was at 5p - my mom was trying to be considerate of us since we were exhausted from our trip. She called them again at 4:55p and they hadn't left the house yet and still h
Read more