April 29, 2010
I called my grandparents around 6:15p to let them know I was catching the train and would be at their place around seven this past Tuesday evening.

"Grandma, I'm coming over. Is that still okay?" I often worry that she doesn't remember.

"Of course it's okay! What time are you coming over?" she asked, excitedly.

"No, quarter after seven," I said.

When I drove up to their house, my grandfather was standing in the front yard by the gate.

"You're right on time!" he said. "I knew you must have said 7:15. When you called, Grandma said you were going to be here in fifteen minutes so I came out here to wait for you!"

"I know that's what you must have said. She didn't remember."

I got my stuff out of the car and went into the house with him. My grandfather berated his wife. "See, I knew she must have said seven! You told me fifteen minutes!"

"I did?" she asked incredulously.

My grandfather returned to the kitchen to finish cooking the mi fun - thin rice noodles stir-fried with chopped BBQ pork, onions, snow peas, egg, and small shrimps. I asked my grandmother where the journal was that I had given them. My mother said she had talked to them about it a few days earlier to remind them, and suggested that it would help them remember more.
"Journal?" she asked.
I re-explained what it was for and what it looked like, that it was large, 8.5"x11", and had an image of Japanese style painted waves. My mother had given her a small blue journal at a different time, for her to write down things she was supposed to remember, which she picked up.
"Is this it?" she asked me.
"No, Grammy," I said. We both started looking again. The dining room table was pristine - she had cleaned it for my visit. I began looking around the living room, under papers and other books.
"Is this it?" she asked me again, a minute later, holding up the small journal again.
"No, Grammy," I replied. "That's not it." I didn't want to make her feel bad. We both continued looking.
A few minutes later, she exclaimed, "Ai-ya! Is this it?" She held up the small journal for the third time.
"No, Gramma," I said. "Do you know that you've shown that to me three times now?"
"I did?!" she asked, completely surprised. She smiled. At least she's able to still keep a good sense of humor about all of it, and she's recently started acknowledging that her memory is failing her.
My grandfather brought the plate of noodles out to the table. 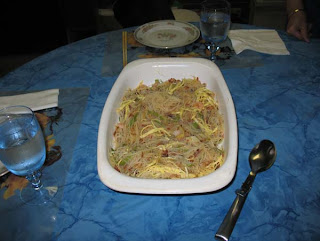 "It's okay, Ba, let's just eat the food while it's hot. We can find the journal later!" I said. 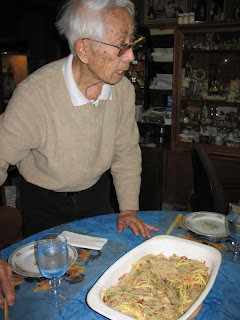 My grandmother and I sat down, but he began to putter around, trying to find the journal. 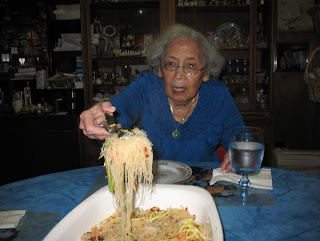 He rummaged around a little more and finally found the journal in a pile that must have come from the dining room table before my grandmother cleaned.
"See!" he scolded. "She cleans the table and then she can't remember where she put anything from it!"
He handed me the journal. I opened it and was glad to find that there were two entries in it, with a significant amount of writing. I smiled at my grandmother proudly.
"You wrote in it!" I said to her. "Good job!"
"I did?" she looked surprised.
"Yeah, you did," I replied. I read the first entry. It was an answer to the question, "When you think of your parents, what do you remember about them?"
My grandmother was adopted. However, in the journal, she only wrote about her adopted father, which was strange to me. I had never heard any stories about her father, only about her mother, and how her mother mistreated her. After reading, I prompted her with some of her descriptions to get her to talk about it more.

"My father used to take me to the park one day, every weekend, and he'd buy me whatever I wanted. He was really good to me. He'd sit on the bench and watch me play."
The story changed slightly as she started into a loop, telling me the same few things about her father many times in a row, each time with the same enthusiasm as if it were the first time, since she couldn't remember what she had just told me. I nodded my head with interest for each iteration. Sometimes he had only one day a week off and worked six days a week, other times he would take her there both Saturdays and Sundays. Although I never figured out what the business was, it was on Pier 29 in San Francisco, and that's where he would take her on the weekends, where vendors would be selling peanuts and other snacks that he would buy for her. And, his name was Sam Law.
"His first name was the Chinese word for 'three': 'sahm,' " she said, when I asked her. "He's the only person that was nice to me. My mother was never nice to me."
She told me over and over with a tone that had qualities of being matter-of-fact, as well as an air of an almost forgotten sorrow, that her father died very young of tuberculosis.
"He was only forty-seven," she said. "People still died of that then, especially in Chinatown where everyone lived very close together."
Her mother never worked, and lived off of the money her father left after he died, as well as the money that my grandmother was forced to give her when she babysat. She was in junior high at the time.
"She never even gave me money for lunch or transportation!" my grandmother said bitterly. "I had boyfriends who would give me some of their lunch money because they knew how my mother treated me. They would get a dollar every day for their lunch, and they'd give me a quarter. That was a lot of money back then. You could get noodles in Chinatown for five cents."
She told me about how she had to tell her babysitting clients to start paying her in cash because her mother would take the whole check, leaving her with nothing. She'd take some of the cash and give the rest to her mother, telling her, "This was all I got."
"I had to," she said. "Otherwise I'd have no money to take the bus to get to the places where I had to babysit or go to school. I learned to take care of myself early."
She explained that her adopted father wanted a girl, so they adopted her first, and then later, her mother wanted a son to carry on her husband's name. Her adopted brother never had to work, and was favored by her mother, but they are still close to this day. I still see my Uncle Ed once a week or so at Sunday dinners. My grandmother never held any jealousy or ill-feelings towards her brother. Any leftover hostility was directed at her mother.
My grandfather also told quite a few stories that evening, but this post is already getting pretty long. I'll save them for my next entry.